A weeklong delay was not fruitless

Due to a cold my husband and I caught over the weekend, I had to put a hold on my basal experiments as my blood sugars were too high and not very responsive to insulin doses.  I actually had to increase my insulin but found it out too late for it to be useful this time around.  Now that I am over the cold my numbers have returned to normal and I can continue with my experiments.  This taught me a very important lesson, however, and I'm happy to know now that I need extra insulin during such times.  Once I figure out my overnight basal during normal days, I will be able to figure out increases for odd days when things don't go as normal.

I've also been made aware of another A1C chart that is used by Dr. Richard Bernstein, and I've decided to post it here so you can see it. 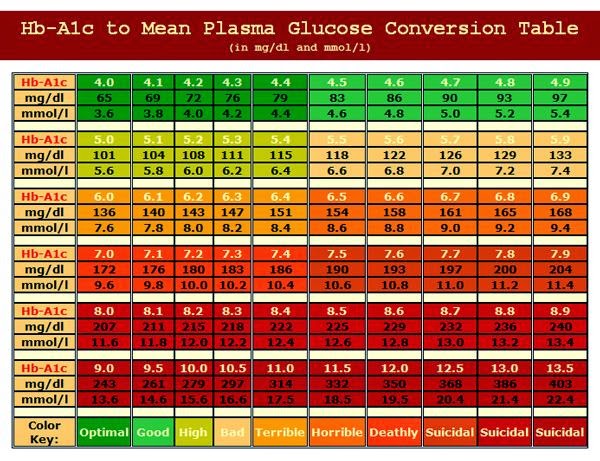 Certainly some of the values vary, and I'm still trying to figure out what I think of this chart, but for now, I'm happy that by Dr. Bernstein's standards I am doing better than I previously thought in reaching an A1C of 7% or less.

Posted by Rachel at 9:05 PM No comments:

Since following Dr. B's guidelines for normal blood sugars, and 83 being the target, I have changed my correction target from 120 to 83.  This means that for every 50 points that my blood sugar is over 83 mg/dl, I give 1 unit of Apidra.

I have 1 more night of testing 11 units and then I'll move to 10 units because it seems 11 is still too much.

As I've had several nights with numbers that have dropped while I sleep, I've decided to conduct some experiments with my overnight basal insulin.  Last night was my first night decreasing my dose, and I started by taking 11 units of Levemir instead of 13.  I will need to collect data for 2 more nights before I can confirm whether 11 is too much (or too little).  Here's what I collected (and the graph to go with it):

I'll be repeating this tonight and tomorrow night.  If 11 is too much still, I'll try 10 units.
Posted by Rachel at 1:46 PM No comments:

Modern western medical training is downright shameful, especially when it comes to educating patients newly diagnosed with diabetes.  They really need to get their act together.
Because doctors are all about advocating the high-carb, low fat diet, countless diabetics struggle through life believing they are doing everything right when, in fact, their blood sugars are nowhere near the levels of non-diabetics.  They often experience diabetes-related complications, even though they are doing everything their doctor tells them to do.  They are also often told conflicting things about what they can eat.

"Basically, you can't eat anything that tastes good."
"You can eat whatever you want, in moderation, of course."

So, um, which is it?  Misinformation is everywhere, spread by different doctors.  No wonder so many diabetics are struggling, myself included!

I lived under the dark cloud of hopelessness because I was never given any correct information.  I never believed I could have normal blood sugars because, well, face it, I'm not normal.  I'm a diabetic and diabetics have different blood sugars than non-diabetics.

What a bunch of hooey!  I've come to learn, from one of the oldest known living type 1 diabetics, Dr. Bernstein, that diabetics can and DO have normal blood sugars.  It is not impossible!

How do diabetics achieve normal blood sugars like this?  By following a low-carb, high fat diet.   Contrary to popular belief, fat does not make you fat...carbs do!  There's a reason the Watkins and Atkins diets work better than most other diets (not that I know from experience)...they are low-carb!

So I have a new goal: keep my numbers between 70-100 as much as possible...even at bedtime.  I may  need to decrease my basal insulin (Levemir) but I won't do anything without Carrie's input...unless I start to see a repeated pattern.  Speaking of which, I have noticed multiple nights where I have gone to sleep around 150 or higher and I woke up around 70-80 so I may message her and ask her what she thinks.  See the past 3 nights here:

In other news, I'm loving using sugar cubes to treat lows!  :D  They are so easy to count carb-wise, have nothing but sugar in them, and they work great!
Posted by Rachel at 1:40 PM No comments: 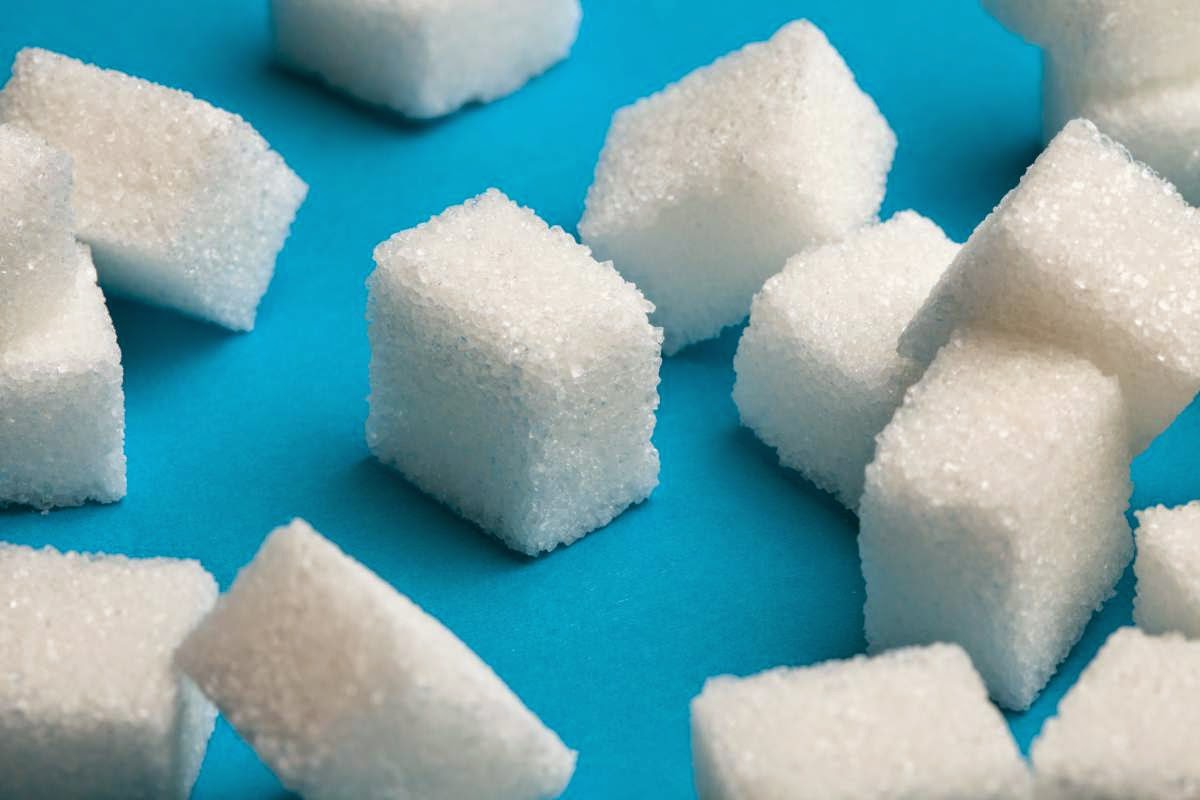 Sugar cubes.  Since I discovered that glucotabs have a number of unnecessary and toxic ingredients, I've been considering another fast-acting sugar source that is also available in a small, controlled amount.  Obviously, a spoonful of sugar is too variable.  I could either take too much or too little when treating a low and not know exactly how many carbs I'm using to treat said low.  Then I thought, what about sugar cubes?

Sugar cubes are only made of sugar, but they each have a certain amount of carbs per cube - 2.3 to be exact.  So basically, 2 cubes = 1 glucotab.  As I'm in the middle of treating a low right now and I've just eaten my last glucotab, I've decided not to buy glucotabs anymore.  Sugar cubes will become my new best friend!

Speaking of lows, for the past 6 days, my numbers have been amazing!  This past week, my average has been 130!  I had a few spikes, even overnight ones, but they quickly came back down and never went over 200!  I've also had a few lows, but they pretty much never went below 60.  I am extremely happy and excited!!

Posted by Rachel at 5:28 PM No comments:

Following a low-carb diet has made a tremendous impact on my numbers.  For the past 3 days my numbers have stayed under 200, hovering mostly around 120.  Now, however, I finally have the tool that's going to change everything, that's going to tell me how to blow Carrie away.

This book has made a huge difference in the lives of diabetics everywhere - I only wish I'd known about Dr. Bernstein's method sooner.  But now I'm ready, now I'm motivated, now I'm determined to put good diabetes management into practice.  Now I'm going to do what I always thought was impossible and achieve normal blood sugars.

Please continue to spur me on as I run this race with increasing endurance.  May God receive all the glory as I embrace this gift He's given me (yes, diabetes is a gift!) and continue to improve my healthcare in the way I feel I should to be the best steward of this earthly body that I can.
Posted by Rachel at 4:31 PM No comments:

Best day so far!  My numbers have been under 200 all day.  It's amazing how good I feel eating almost no carbs...and I don't even have Dr. Bernstein's book yet!  I am praying so hard that it comes this week!

Posted by Rachel at 7:23 PM No comments:

I ordered a skin for my Dexcom from PumpPeelz and it arrived today!  Now my Dexcom has my personality and favorite color on display!

Posted by Rachel at 3:56 PM No comments:

Best progress made yet!

Right off the bat, I noticed that this new sensor location on my leg has been doing perfect!  It hasn't let me down, and I am quickly adjusting to it being there - although I sometimes reach down to feel it to make sure it's still okay or to keep myself from bumping it into things.  It seems to be perfectly situated out of harm's way, though.

I'm so pleased with how well my numbers did yesterday that I just have to share.  I woke up at 93 and my numbers continued to stay constant all day!  I had very few carbs (scrambled eggs with cheese, meat rolls, chicken & broccoli, and a new carb-free coconut & almond milk drink I found at Walmart) and the few that I did have (Italian Ice, 20 grams) only brought my number up a minimal amount with a bolus.  I did notice that I dropped overnight and had to have some glucotabs this morning, but that's okay.

Anyway, here are the numbers I've been seeing since my last appointment.  As you can see, most of them are in the 101-190 range.

And here are my average, high, and low blood sugars for the past week.  I love how the Dexcom makes it easy to see the trends, averages, highs, and lows.  I love graphs and charts that make the numbers and your health care come to life.

Today's appointment with Carrie could not have gone better, and it only lasted for 30 minutes!  Other than needing to adjust my synthroid dose back to 125mcg, there was nothing but good news!  And the best news of all?

If you remember it was 9.5% at my last appointment in January.  It came down a whole point, and then some!  Best progress made yet!

Once again, I'll be having my thyroid levels checked in about 6 weeks, and then I see her again the beginning of July, right before my diaversary.  I CANNOT wait for my Dr. Bernstein book to get here!!  I'm going to hit 7% in July for sure!

Posted by Rachel at 3:36 PM No comments: