I am so thankful and have so much hope

I'm starting to have some inkling of how the Israelites felt after wandering in the desert for 40 years waiting for the Promised Land.

I didn't have to wander nearly as long, but I still wrestled with all of those feelings.  I wandered around the bottom of a dark pit and almost gave up because I thought there was no hope.  No light.  No good could possibly be in store for me.

But I was wrong.

It was in my darkest moment that the Light of the Lord shone the brightest.  It was when I finally realized my dark pit was of my own doing that I knew I needed saving from myself.  It was when He told me His love would save me, if I chose to accept His gift of salvation, that I knew there was forgiveness.  It was when He reached out and turned my life around that I knew I was not forgotten.  Not abandoned.  Not without hope.

This was the start of something new, something beautiful.  I stepped off the path of destruction and onto the path of life.  My mind was renewed in more ways than one, and it continued to learn and grow as I absorbed new knowledge and wisdom.  I realized that anger toward God was a sin.  I blamed Him for allowing me to have diabetes, not realizing that He was planning to use it to bring good into my life.  I only chose to be selfish, to see it as an unfair punishment instead of as a tool to be used for a greater good.

Once He led me off that path of selfish bitterness, I started to see some of the reasons why I had been given such a condition.  And not just one condition, but three.  My eyes were opened to the truth: experience helps us grow and relate to others who are in the same place.  Who have no hope.  Who see no life apart from their misery.

The greatest testimonies are the ones that God orchestrates.  And He orchestrates them all.  Your testimony is no worse or better than mine.  It has been crafted by His hands for a purpose only you can fulfill.  If you see a need that you can fill, fill it.  If you see a dark pit that you can reach down into, reach down into it.  The person at the bottom needs light in their darkest moment, just as I did.  They need hope in a hopeless situation.  Don't doubt that you could be that person.  You are ONE with the Light of the World; you are not just a small flicker.

Diabetes is not a death sentence.  There is hope.  There is life, and it doesn't have to be a short, agonizingly painful life.  Complications can be prevented.  Health can be restored if you are ready to commit to what it takes to love your body and care for it.

"For no one ever hated his own flesh, but nourishes and cherishes it, just as Christ does the church."  (Ephesians 5:29)

November is National Diabetes Awareness Month.  Lots of people are doing different things to raise awareness.  I thought it would be fun to make this little chart. 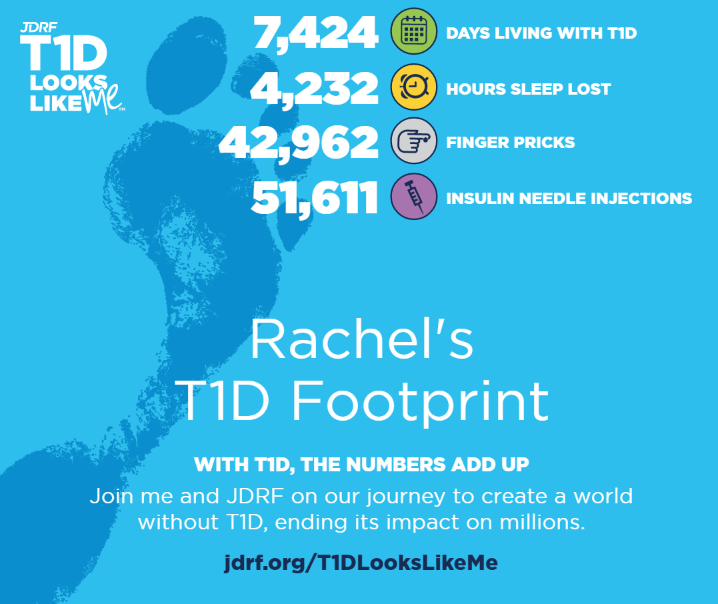 Since I usually test 10+ times a day, the number listed should actually be doubled = 74,240 finger sticks since I was dx'd with Type 1.  I have no clue how they figured out the Hours of Sleep Lost...I don't keep track of my sleep hours and didn't put anything into the page when it made this for me.  I'm sure I've lost months, maybe years, worth of sleep because of diabetes but I have no clue exactly how many.  At any rate, I hope this helps people see how much of an impact diabetes has on a person's life.  It's a rough, 24/7/365 disease that can kill quickly or slowly, depending on when it's discovered.

I had my annual eye doctor appointment yesterday.  There were no significant changes, only slight ones in my vision.  I don't need new glasses, though, so I may just keep the ones I have.  Doctor said to keep up the good work with my numbers, which I certainly intend on doing.
Posted by Rachel at 10:22 PM 1 comment: