Insurance, doctors, and tests...oh my!

I'm still trying to figure out how to get these tests done without spending an arm and a leg.  It seems the best option is to go to an in-network doctor and have them order the tests, then transfer the results to the holistic doctor who's going to oversee my care.  I called the insurance company today and had them send me a list of in-network doctors in my area, and then I called the one that I've actually seen before (a year or two ago, when I was with a different insurance company).  Seems I'm going to have to make an appointment with them because they haven't seen me in a while.  *sigh*

I'm annoyed.  Why do all the medical expenses have to occur at the beginning of the year?  Why can't medical stuff be less complicated?

I also found a new medical supplier for my Dexcom supplies.  They called my endo's office today and requested a prescription for my sensors.

I'm going in for lab work on Monday or Tuesday for my appointment with Carrie on Thursday.  My numbers have really been improving and I'm hoping for a great A1C in the 5s!  (Well, according to Dr. B, I already am in the 5s, but I mean according to the endo's office.  That will really get their attention!) 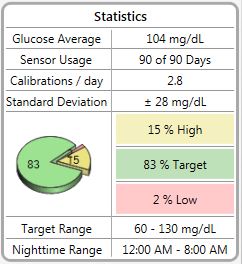 I was also selected to participate in a low carb survey!  It's really exciting!
Posted by Rachel at 9:30 PM No comments:


As you can see from the stat graphs above, I've been having a little bit of success with better numbers!  This makes me really happy!

Unfortunately, I received word that my old medical supply company, Edgepark, does not partner with my new insurance company (BCBS TN).  So now I have to find a new in-network medical supply company from which to get my Dexcom supplies.  *sigh*  BCBS sent me a list of companies to go through so now comes the fun part of picking one.
Posted by Rachel at 6:04 PM No comments:

I gotta say, I never get tired of seeing this sight.  Beautiful overnight numbers!  Let's keep this up.

16 more days until my next endo appointment.  Sure hope my A1C will be in the 5s this time!
Posted by Rachel at 11:41 AM No comments:

Ever since my kidney infection ended I've been battling panic attacks.  Chest tightness and shortness of breath have accompanied them, and there haven't been any pinpointed triggers.  A few of them were so bad I thought I was having a heart attack, but I know now that that's how panic attacks feel.

I came across a holistic doctor in my area while doing a Google search and made an appointment with them this past Wednesday, the 10th.  It couldn't come time for my appointment soon enough.

The gist of it is this:  we're going to do lots of tests (5 different kinds, to be exact) to gather as much data about my body as possible.  Along with the panic attacks, I have nutritional deficiencies and I want to check on my gut health (since Celiac, Diabetes and hypothyroidism, which is now believed to be Hashimoto's, are all connected), which may help explain some things.  The doctor was super nice and told me that their office focuses on absolutely personalized care, which means I'll get exactly what my body needs and not just a blanket treatment.  Once we get all the tests done we'll have a pretty clear picture of what that all looks like.  I have my first two tests this coming Wednesday (the 17th).  Please be praying we'll be able to get the other tests scheduled and done soon as the cost for those tests is significant.
Posted by Rachel at 1:26 AM No comments: