I went in for fasting labs on Monday morning.  They were quick and painless...3 tubes full of blood and I was done.

On Wednesday, I got an email saying that my transmitter had finally been shipped...and what's more, it had already been delivered!  I ran out of the bedroom to find that it was laying on the kitchen floor in the FedEx box, which DP had brought in before he left for work.  I opened it up and praised God for its timely delivery (it had been over-nighted to me before I knew it had even been shipped!).  I would've put it on right then and there but I was delayed by a family emergency.  ;)

Today, I went in for my 3pm appointment.  After the nurse went over the usual questions and medicine doses, Carrie came in to discuss my numbers and lab work.  The first thing she pointed out was my A1C.  It had dropped a whole percentage from 11.1 to 10.1!!  I was so thrilled!  I reached my goal for August!

She then went on to say that both my HDL & LDL cholesterol levels were normal and the rest of my lab work came back normal.  Even my thyroid is where it should be!  I couldn't believe it!  Even though my A1C is still high, I found it to be a very good health report card!

She suggested that I start my Dexcom today and set my low at 70 and not to set my high alert so that I wouldn't get annoyed at it right off the bat for going off all the time.  Every week or two I'll set it 50 points lower until I get it down to about 200.  I'll be coming back in 6 weeks so they can see how my Dexcom is doing. 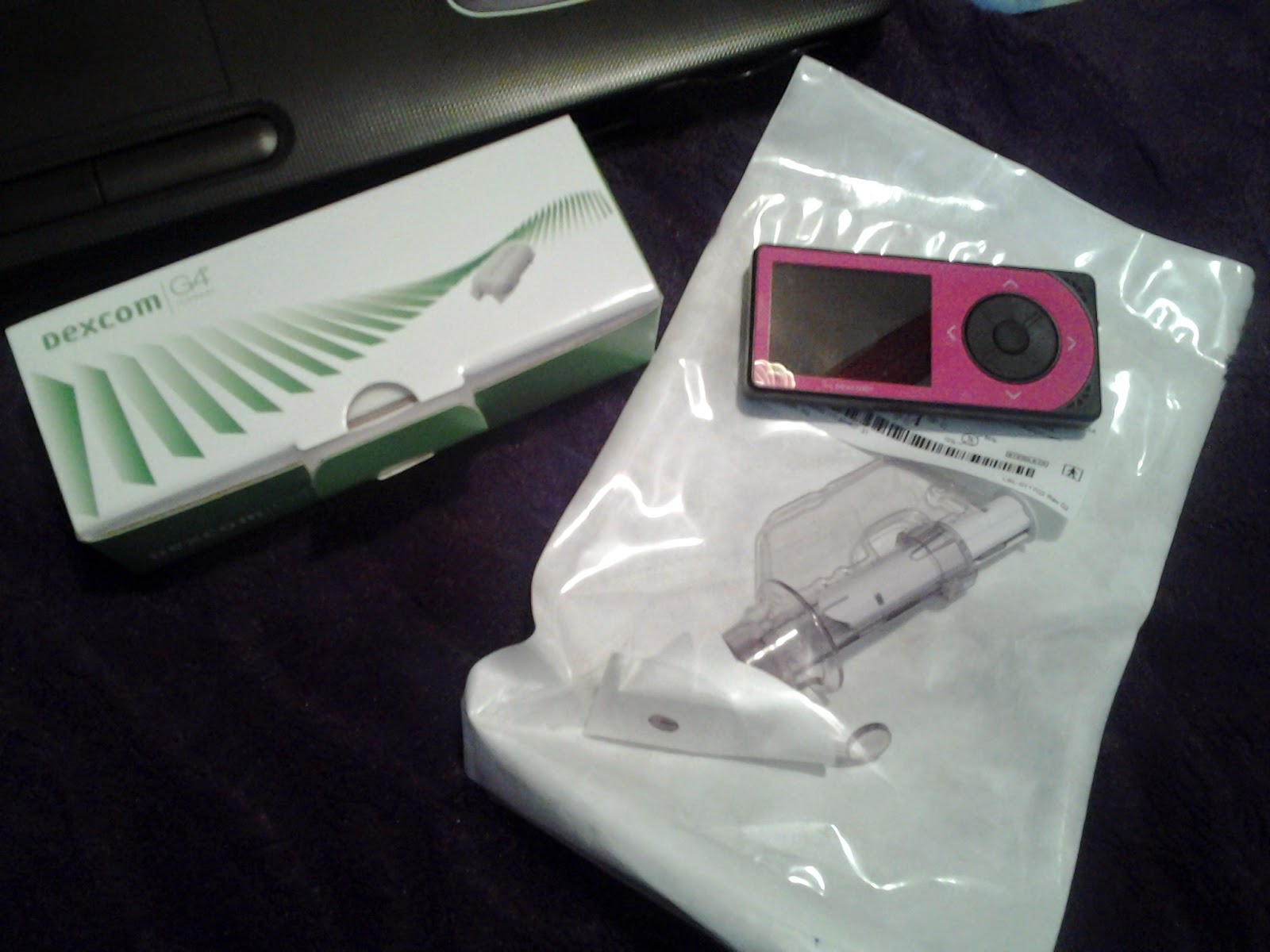 After watching the tutorial video, I now have my Dexcom sensor and transmitter in place.  My receiver is all set up and ready for action.  At 6:45pm, I'll do my first calibration session.  Until then, I've got a yummy dinner to make in celebration of this wonderful news and God's goodness!
Posted by Rachel at 5:18 PM No comments:

Yesterday, my Dexcom finally arrived in the mail. It came with a box of 4 sensors, too, but the transmitter was not included in the order. It is still being processed. There was a hiccup with the insurance company and Dexcom. They thought that I had ordered 2 transmitters and so they weren't going to cover the 2nd one. However, someone misread or misunderstood and thought that that meant BOTH transmitters were denied...so Dexcom didn't send me ANY.

I'm still waiting to hear from Dexcom about the status of the transmitter. I tried to see if the problem originated in my endo's office but I couldn't get through in time. Thankfully I am going in on Monday and Thursday next week for labs and an appointment so I'll be able to talk to them then. Sadly, until my transmitter comes, I can't start using my Dexcom. It is a pretty cool looking device though, and it's so nice to finally have it in my hands. 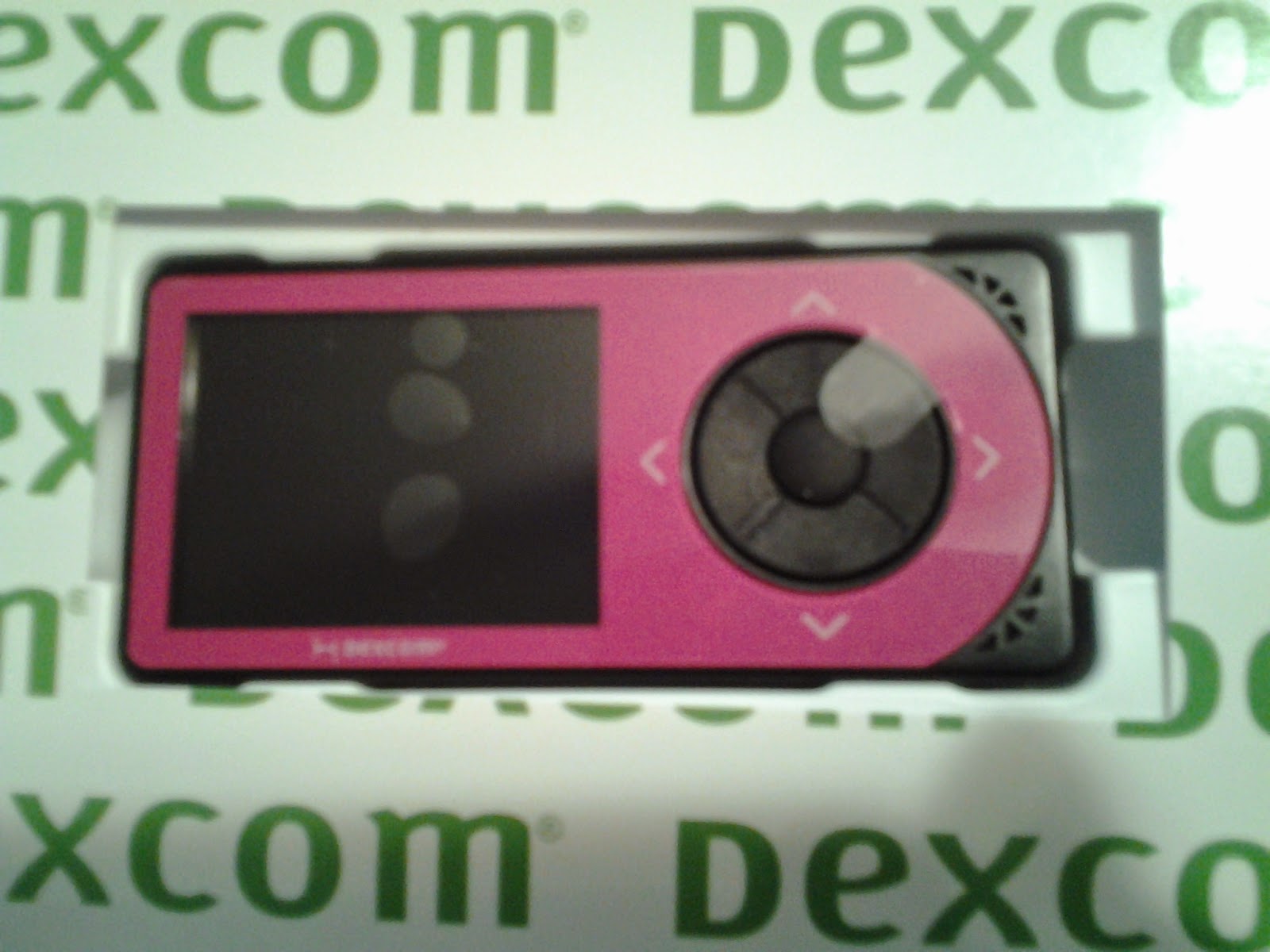 Posted by Rachel at 1:44 PM No comments:

I decided to call the insurance company today to check on the status of my Dexcom authorization.  They are still in process of making the decision and probably won't have it made until next week.  *sigh*  I'm depressed.

Thankfully, my numbers have continued to remain in my target range for the past 3 days.  I'm so happy to finally be on a positive roll with them.  I don't remember them ever being so good for so long.  That's sad, but also encouraging.  I am getting closer to my endo appointment on the 28th and I'm really hopeful about my A1C.  I'm pretty sure it will be much better than May's A1C at 11.1%.  If it dips down into the 10% range, I'll have met my first goal.

Of course, I won't be able to check my A1C every month (only every 3 months, I think) so my next check should be November sometime.


A full day of good blood sugars is possible!  Yesterday was one of my best days in a long time as far as blood sugars go.  This is what I’m aiming for – more days like this and better!

From 10-2 I was at work and doing some manual labor.  I’m kind of surprised to see that my numbers were staying around 200…I thought they would come down from the exercise.  Still, I am pleased with what I’ve managed to do as far as management…staying between 230 and 87 is major!
Posted by Rachel at 6:48 PM No comments:

Waiting for my birthday present

My birthday's not til tomorrow but I still consider my Dexcom an early birthday present. They never gave me a tracking number so I have no idea where it could be...I just know it's supposed to be delivered today.

I've been waiting by the door and the window in great anticipation today.  Around 3:30 I decided to check on the Dexcom website to see if I could track down the tracking number for my order.  I noticed that my order status was "prepare for shipping."  My heart sank as I realized that the reason I hadn't received a tracking number was because it hadn't shipped yet.

I called Dexcom to see what was going on.  They informed me that my order had not been shipped yet because the insurance sent it through the quality department and they were still waiting for authorization from them to ship it to me...whatever that means. When I spoke to the Dexcom guy on Monday I was under the impression that there wouldn't be any more delays and that I'd have it in my hands today. Since that's obviously not the case I am sorely disappointed.
Why does this have to be so difficult? That's always been my question. Why are simple things made complicated unnecessarily? I know God has a purpose in all of this but it's so hard to see it.
My numbers have been bouncing around all over the place today.  I woke up low, at 70, and now I'm waiting for the insulin I bolused to kick it back down out of the 280s.  This battle is wearing me down.
Posted by Rachel at 11:46 AM No comments:

My Dexcom is on the way!

Today started out rough - dealing with some introvert fatigue and other minor annoyances.  I missed a call from Dexcom but called them back and left a message.  4 1/2 hours later, they called back.  I am now happy to report that...
I placed my order for a pink Dexcom G4 Platinum!

I asked him when I would receive my Dexcom in the mail.  He said it should arrive via FedEx on Thursday!  I couldn't believe my ears!  That's just in time for my birthday!  I had been hoping that I would have it by then!  I started crying tears of joy once I got off the phone.  I'm still shaking a little from amazement...how good God is!

Posted by Rachel at 4:24 PM No comments: