When Non-Diabetic Numbers are the New Norm

And now, I'm seeing a new trend.  A lifesaving trend.  A glorious God-deserves-all-the-glory trend.  My blood sugars have been averaging in the NON-DIABETIC range!!  This is from the past two days:

And this chart breaks it down for the past 5 days...and there are plenty of other days before this that look identical!  I've never seen so much green (and red!): 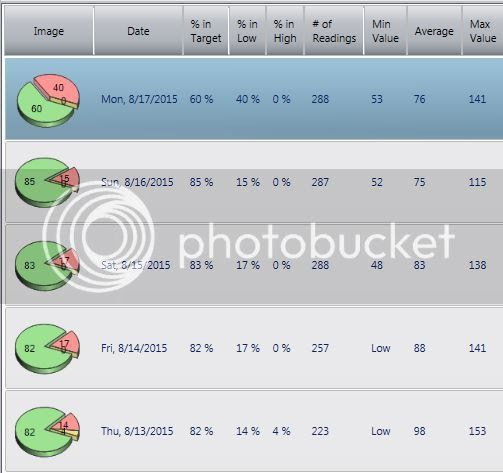 Daily averages in the 90s, 80s, and 70s!!  Never in my life did I ever think I would see those numbers being said of me and my diabetes.  Never!  I can pretty much guarantee that this trend will continue...these numbers don't lie and at my next appointment with Carrie I am really going to knock her socks off!  My appointments will be pushed back to only twice a year and I'm going to bet my A1C will be 5.0s or 4.0s!!
Posted by Rachel at 1:13 AM No comments:

Low carb to the rescue!

A few overnight lows have led me to believe that 6 units may be too much.  I went back to taking 5 units of Levemir and I think I'll just stick with that for now.

One thing's for sure...low carb has been a lifesaver!  I've been making and testing out recipes for fat bombs and I've found a favorite - Zesty Lemon Cheesecakes!  I posted the recipe on the Fat Bombs page at the top of my blog.  They add a good amount of healthy, filling fats to my diet, which I realized were lacking.

In honor of having my Dexcom for almost a year now (coming up on the 23rd), I thought I'd celebrate with a little comparison post.  I am so blown away by how good and gracious God has been to me this past year in particular and I can't thank or praise Him enough for all the progress in blood sugar management that He has allowed me to see thanks to my Dexcom and my diet changes.  It is only by His grace that I am on track to excellent blood sugar management and it is for His glory that I continue to strive for excellence in my own health.  (I also seek to bring Him glory by learning about how He designed our bodies so that I can help others strive for better health as well.  Speaking of which, one of my nutritionist books arrived yesterday!)

So without further ado... 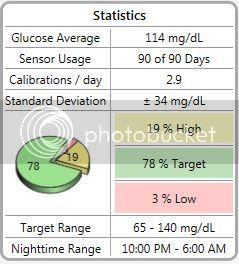 I tried 6 units of Levemir at midnight last night and I'd say things went swimmingly!  I didn't have to wake up early to correct or anything (the 8am insulin icon is for my usual Levemir injection).  I went up to 122 around 4am but then it went down on its own and stayed level.  I must've had some low carb leftovers in my system or something - maybe that cheese stick I had before bed?  At any rate, I think 6 units will be my midnight dose now.

Since July 30th, I've managed to stay in target more than 90% of the time, with my daily average blood sugars in the 90s and low 100s.  I've had a few lows but they were easily treated.  My numbers seem to only get better!
Posted by Rachel at 12:45 PM No comments:

Just wanted to share my blood sugar trends for the week.  It also helps me to see patterns, such as lows and highs.

This week's graph is telling me that I'm running a bit higher overnight than I want to be.  I'm going to see if 6 units of Levemir at midnight will take care of that tonight.  I've been having to get up at 6 in the morning or so to correct a few times and I'd rather not keep doing that.
Posted by Rachel at 1:03 PM No comments:

I forgot to mention in my post about my last appointment with Carrie that if my A1C drops even lower than it was last time (6.7%) that she's going to have me come for appointments every 6 months instead of every 3 months.  That will cut down on doctor appointment costs significantly (because every office visit costs us $$$).  We currently have a pretty sizable debt we have to pay off for all my appointments, but we will knock it out with Dave Ramsey's Debt Snowball after we get enough money in savings.

So I've decided that during the time when I would've had a 3 month appointment with her I will use an inexpensive home A1C test (which you can get at Walmart) to see how I'm doing.  Dexcom Studio is accurate for the most part, but really only as accurate as the data that it downloads (which has its hits and misses).

Anyway, according to my DSS (Dexcom Studio Software) my average BG is sitting pretty at 118 (5.7%) so that's a whole point my A1C has reportedly come down.  I think those 6 month visits are going to happen!  Another reason why low carb is the way to go!

I'm just floored by the statistics in an article I read.  I shared it on Facebook, but here's the link to it:  https://optimisingnutrition.wordpress.com/2015/08/02/standing-on-the-shoulders-of-giants/

Some things that stuck out to me:
"People who have type 1 diabetes and excellent blood glucose control are statistically rare.  According to the T1D Exchange, 1.2% of type 1 diabetics in the US have a ‘normal’ HbA1c of less than 5.7%."
Carrie echoed this at my last appointment when she said, "These sorts of numbers aren't seen in Type 1s."

"...it is not possible to achieve normal blood sugars with large amounts of carbohydrate in the diet."  AMEN.
Posted by Rachel at 3:42 PM No comments: To me, this is nothing more than proof that low carb is the way to go.  I never thought I'd see such improvement in my life.

Also, I've been discussing my diet with other diabetics online and have discovered that I need to be adding more fat to my meals.  I'm probably even eating too much protein but I think if I just add more fat I'll be okay.  I'm really excited because I went searching for some "fat bomb" recipes, and I found a whole bunch I can't wait to try!  (Fat bombs are dessert-like snacks that are made up of healthy fats like coconut oil, peanut butter, cream cheese, and nuts.)

I can't wait to start my Nutritionist training at the Life Training Institute.  I've been calculating the cost of books on top of tuition and how long it may take me to complete the training course and receive my certification.  Looks like anywhere from 8 months to a year and 4 months is the average time frame for most people.  Cost is about $1,300 altogether so I have some saving/budgeting to do.  But I know this is what I want to pursue because I've really enjoyed giving helpful advice to other diabetics online.  God's given me this gift (diabetes) for a reason and I know helping others will bring Him glory.  I just need some Biblically-based education and I'll be on my way.  :)
Posted by Rachel at 1:43 PM No comments: