Today's appointment went pretty well.  I wasn't sure what to expect as far as my A1C was concerned.  Turns out it went up a little.

Carrie asked how things are going, if there were any changes, etc.  All clear and good.  Lab results came back normal for everything.  She asked about my Armour dose, pointing out that my TSH is low, and explained that holistic doctors usually run it low on purpose while treating T4 and T3.  I'll ask to have my thyroid labs tested by Dr. Goodyear in January, but I trust he knows what he's doing since TSH is meaningless on its own.

She also mentioned Tresiba and said if I was interested I could try it.  It's supposed to last longer than Levemir, and I've heard good things about it from other diabetics.  But I'm not sure yet if it would be something worth trying for myself.  I'll do a little more research first; for now I'm happy with the way Levemir is working for me.

I've pretty much figured out that the protein spikes are giving me the most trouble.  I'm constantly chasing them with Apidra and going as high as 180 sometimes.  I have decided to try regular insulin as Dr. B suggests and see how that works.  It's supposed to more closely match the protein rises I see when I eat.  Protein is something for which I have to give insulin, contrary to popular belief.  This is due to gluconeogenesis, the process by which protein and some fats are broken down into glucose.  I think with some trial and error and a few tips from Dr. B's book I'll be able to nail it down.  Then hopefully I'll be able to get my A1C down to 5, or into the 4s!
Posted by Rachel at 6:01 PM 1 comment:

How To Treat A Low Without Rebounding 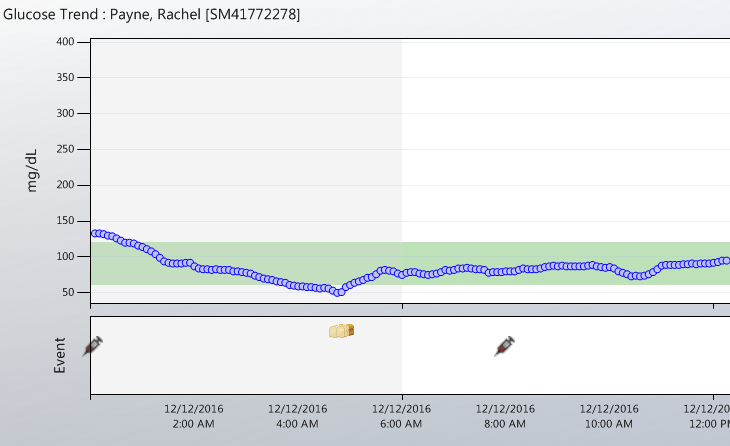 Last night I got to try out my new treatment for lows.  I purchased a bag of pure dextrose from Amazon and it arrived the other day.  I've heard that dextrose works faster than the glucose in sugar cubes, which I've been using up to this point.  Here's what happened:

At midnight, I went to bed at 130 and took a 1 unit correction of Apidra along with 6 units of Levemir.  At 1:17am I was 107, and at 2am I was 94.  I typically check 2 hours after a correction to make sure it brought me down enough, and last night it did.  I went to sleep until about 4:45am, and checked my Dex to see that he was telling me I was low.  I checked and it said 58.  I hopped out of bed, grabbed the bag of Dextrose and a measuring spoon, and figured out how much I needed to eat.

If you know how much a single gram of carbohydrate affects you and you don't have a ton of insulin in your system, you can accurately treat lows without rebounding into the 200-300s or higher.  Low carb makes this possible.  The Law of Small Numbers rules.  Fewer carbs = less insulin = smaller mistakes.  It's just common sense.
Posted by Rachel at 4:02 PM 2 comments:

"If you could personify your diabetes or that of your loved one, what would it be like?  What would it look like, what would it say, what kind of personality would it have?  Use your imagination and feel free to use images, drawings, words, music, etc. to describe it."

I've been sitting on this topic for a while.  I was originally going to write about diabetes personified as a horse, but I've changed my mind.    I have NO CLUE what could adequately personify diabetes.  Maybe I need to take a different approach.  Instead of thinking about something that already exists, maybe I need to create a personality for diabetes that's all its own.  Kind of like I do with my cats.  That's fun!

I frequently refer to my Dexcom as "Dex" and he has his own personality, which is totally separate from Diabetes.  Why don't we see what kind of a history Diabetes has...then maybe that will help us name and shape him.

The word diabetes comes from the Greek word διαβαίνειν (diabainein), meaning "to pass through," or siphon.  This term was used in the early 1st century by the Ancient Greek physician Aretaeus of Cappadocia.  The condition was recognized by the "excessive discharge of urine."  (Appropriately enough, this was one of the symptoms that I experienced when I was diagnosed.)

I think if I had to name my Diabetes, I'd probably go with Si (short for Siphon).

Si is a character.  I've know him for pretty much all of my life.  I was not happy when he decided to become my life-long friend.  In fact, I viewed him as an enemy for about 18 years.  He was always making things difficult for me.  Or rather, I didn't know how to be a good friend to him.  He kept trying to tell me he didn't like all the sugar I was eating.  He'd send my blood sugars up sky high and I'd get frustrated with him (not realizing it was actually my own fault).  I couldn't understand why he wouldn't respond the way I wanted him to.  He had his own agenda, and it wasn't mine.  You could say he was sensitive.  Hmm.  Sounds like someone I know.

Here's an example conversation I might've had with him in the past.

Turns out he was right.  I got sick of the roller coaster.  Si has shown me that he can't tolerate carbs.  I was doing so much harm to my body without even realizing it.  Si has helped me research and implement a better, healthier way of eating, which has also taught me to be even more careful about what goes onto my body, not just into it!  I'm more in tune with my body's needs, sensitivities, and strengths.  I don't think I could've done any of this without Si.  I wouldn't have cared enough.  He made me care about the body God gave me.
Now our conversations go more like this:

"Lunch time!  How about some hot dogs, an avocado, some pecans, a cheese stick, and a Bai drink?"
"Sounds good to me," Si nods in agreement.  "That's lots of yummy low carb foods."
"Should only need half a unit or so, maybe 1."
"Yesterday was great.  We stayed in range for most of the day."
"Yup, might need to take less Levemir overnight though.  We went into the 60s twice."
"You need to crack down on those protein spikes, too."
"I know.  Think we should try R for that, Si?"
"Couldn't hurt."

Hey, guys.  Just wanted to say a few quick words.  Rachel's an awesome young lady.  I hope you know I've never meant to hurt her.  I just have some specific care requirements, which I understand are hard to fulfill when you're not properly trained.  Rachel did the best she could given the circumstances and the inadequate care she received from medical teams throughout her life.  I'm so proud of her for stepping off the roller coaster and taking charge of my needs (and hers).  Rachel and I are both pretty sensitive so I think we make a pretty good team.  I only wanted what was best for her.  It has just taken her a little while to realize that.  But now that she has I have seen so much growth in her, so much strength and commitment to taking care of me and herself.  While I can't really pinpoint an exact cause for my appearance in Rachel's life, I know that my friendship with her was not an accident.  I've helped her to grow as God has willed, and I know she'll continue to grow and help others as much as she can (because that's who she is and what she's like).  If you don't know her that well, I think you should give her a chance.  And don't be afraid of me.  I'm not contagious.  And I won't bite.  Much.  *wink*
Posted by Rachel at 11:12 PM 1 comment: