The other night I was going to make my Chocolate Snowcream recipe but as I was measuring out the unsweetened vanilla almond milk, I discovered that it had gone bad.  Ugh.  So I improvised and got creative.  I think the results were pleasantly delicious!  The result was a thick, creamy dessert that tasted and behaved like a Frosty from Wendy's.

Blend the cream cheese, water/almond milk, Pyure, and cocoa power/vanilla extract.  Add the ice cubes after it is thick and creamy.  Makes 2-3 servings.

To make it vanilla, substitute vanilla extract for the cocoa powder.
Posted by Rachel at 4:12 PM No comments: 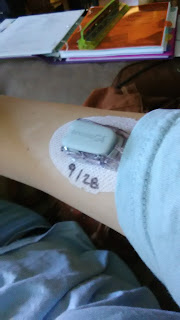 My new transmitter came yesterday.  I was only without my Dexcom for a day, so it wasn't too bad.  I am going to have to reorder more sensors, though, as the box I just got is almost gone.  I used to be able to get 3-4 weeks out of each sensor, but now I'm lucky if they last 2 weeks.  At least insurance completely covers them.

I was supposed to have my labs done this week with my holistic doctor, but a lack of funds made me reschedule for the end of October.  I will have them do an A1C test, since I'll most likely have to reschedule my appointment with Carrie for January due to our trip and a lack of available appointments with her.  I'm also looking around for home A1C tests, since Walmart has stopped carrying them in stock.  Rather annoying really, since I really liked being able to buy them in the store when I needed them.
Posted by Rachel at 2:49 PM No comments:

I'm very pleased and excited to be seeing more Dexcom graphs like this now: 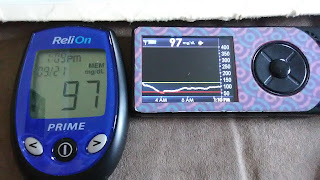 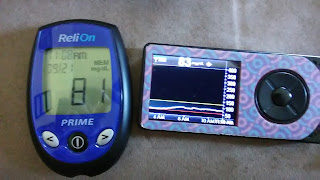 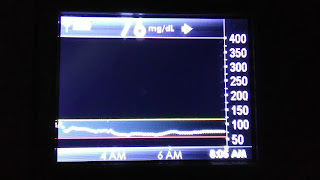 This is the magic number! 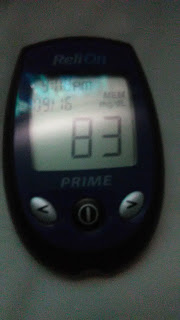 My next appointment with Carrie is scheduled for a month from now, but I will have to reschedule it due to a trip we want to take.  I am anxious to see what my A1C will be though.  Hopefully it will come down.  I also had to reorder a new transmitter for my Dexcom.  The battery alerted that it was low the other day.  I hope it gets here in time so that I'm not without my Dex.
Posted by Rachel at 11:56 AM No comments:

Last night before bed, my receiver decided it would be fun to scare me.  Keep in mind, my receiver is 3 years old now.  Right as I was inputting my insulin for the night, the screen shut off and the buttons wouldn't make it respond.  I sat there for a minute, prepping myself to whip out my new receiver.  Was it really time to say goodbye to the receiver I'd had since the beginning?  My very first baby?

An idea hit me and I grabbed a sewing pin out of my pin cushion on the table.  I used it to hit the reset button on the back of the receiver and it vibrated in my hand.  After a second, the screen showed that it was loading...

And it was resurrected!  Huzzah!  Not only that, but the data was all still there!

Let's keep it going a little bit longer, Dex.  I'm not ready to say goodbye yet.

Now let's see about these numbers...arg... 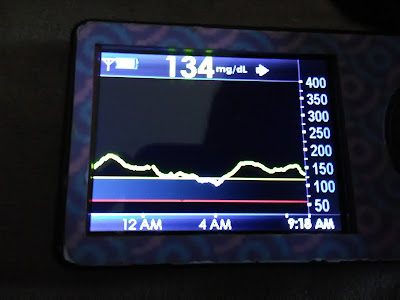 I'd heard about Zevia on one of my diabetes Facebook groups but hadn't actively started looking for it until this past month.  I'm so glad I did!  We've both been missing root beer and cream soda, and of course I won't buy any of the brands with sugar in them!  I had heard that Bai had come out with these flavors, but they weren't in stock at our local Walmart.

One day I was shopping at Kroger and happened to go down the aisle where the Zevia was.  I grabbed some to try and we've been hooked ever since!  No sugar, lots of taste!  And the cream soda and root beer are caffeine free! Friday was the beginning of our long-awaited, much needed vacation.  Hubby and I packed up and got everything loaded in the car for an extended weekend in the mountains of NC.  We had to make a quick stop at Walmart for my prescriptions, though, as I didn't have enough to last me.  The pharmacy assistant rang up my items and then had me step to the side to speak to the pharmacist about my prescription.  They do this every time I order a new prescription, but this wasn't supposed to be one of those times.  Or so I thought.

The pharmacist explained that my Nature-Throid was on company back order and they didn't have any in stock, so they swapped my prescription for Westhroid.  I explained that my doctor didn't want me to take the generic version unless he okayed them.  The pharmacist said he had okayed Westhroid, but he could call another pharmacy to see if they had the Nature-Throid in stock.  I told him that would be great, as I'd rather keep taking what I've been taking.  He called up the Walgreens across the street and found out they had some over there.  He transferred my prescription to them, had the assistant refund my money, and I hopped back in the car.  After a few minutes of waiting for them to get it ready for me, we were finally on our way!

I'll most likely have to have Walgreens refill it for me.  It's so odd that my prescription is for a 15-day quantity instead of 30.  They give me 30 pills and I'm taking 2 a day.  The Walgreens pharmacist also thought this was weird, but maybe it's because it's a new prescription and Dr. Goodyear is just having me test it out first before giving me a bigger supply?  It's only $4 each time.  Would still be nice to have more on hand, though.

I almost feel like the Nature-Throid is helping my blood sugars come down.  It's only been a month and a half since I started taking it, but my numbers this morning seemed to be lower.  My basal is still about the same, at 7 units of Levemir every 8 hours.  It's been like this for about a month.  Usually I fluctuate all over the place.  It's been nice but also frustrating as it's like playing a waiting game.  Seeing results now?  I hope so! 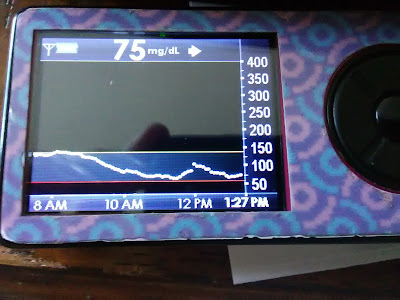 Posted by Rachel at 3:45 PM No comments: