My mySugr Bundle arrived in the mail today!  I'm super excited to start using it!  I've been using the app every day so that I get used to it and it makes tracking things super easy. 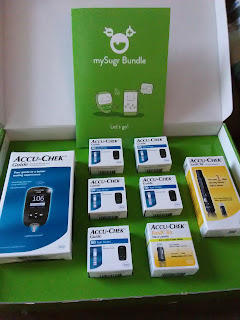 So I learned from a fellow Type 1 on Facebook about an awesome deal - $39.99 per month for unlimited test strips while using an AccuChek meter with the mySugr app bundle.  At first I was disappointed to see that my smartphone, a ZTE Majesty Pro, wasn't listed on their website as compatible with their app.  I contacted the mySugr support team and explained my interest and problem, and the girl answered back asking if I'd like to test out the pairing for them.  I said yes and ran out to Walgreens to buy some test strips and a Guide meter: 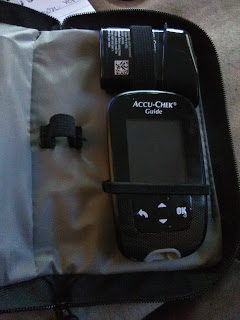 After a few days (and tries!) to get them to pair and share data, I succeeded!  BOOYA! 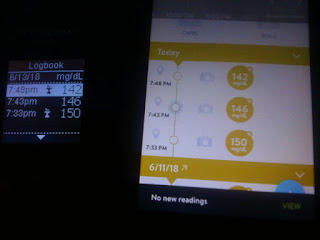 I'm waiting to hear back from the support team, but I think this means I'll be able to save money on test strips now!  Whereas I was spending $50+ a month for 300 test strips at Walmart, now I'll be able to get unlimited for $40!  And it's a cool meter too, with a back light, test strip light, an A1C estimator on the app, and pattern spotting on the meter, plus a test strip eject button (haha).  Pretty spiffy!  Also, the test strip container is specially made to keep the strips from falling out when it's turned upside down.  :)  The case is a little small but I will probably transfer my Guide meter to my old case so I can keep my insulin in there like I currently do.
Posted by Rachel at 8:23 PM 2 comments:

It's been since January that I had my last A1C checked.  My next appointment isn't until August so I bought a home A1C kit from Walgreens.  Today, my result came back at 7%.
I've been struggling with numbers in the 200s.  I guess I'm not surprised.

My tinea versicolor has cleared up!  Yay!  Now to figure out what to do with these naughty numbers.
Posted by Rachel at 7:26 PM No comments: