Today's appointment went pretty well, over all, but I have to admit I was disappointed.  I was praying my A1C would be lower - in the 5s - but that proved to not be the case.  It came back at 128 mg/dl, or 6.1%.  Everything else looked good, although my thyroid was a little higher than Carrie would've liked.  She left my dose as is though, since there isn't an in between dose.  We'll see how things look in a few months when I go back on June 23rd.

Anyway, I was so disappointed when I got home that I took one of the home A1C tests I'd bought not too long ago to see how it compared.  This is the result I got: 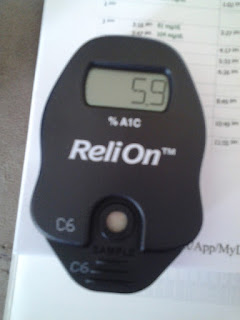 Yes, it's in the 5s.  And Dr. B's A1C chart says I'm in the high 5s (5.8) so I guess that's where I am.  I'm trying to figure out how to get out of this rut.  I thought I'd been cracking down on things but I guess I haven't as much as I thought.  I feel so close yet so far...again.  And it's annoying because even though it's ever so slight, I've gone backwards a bit.  I know I had a bunch of false lows on my Dexcom (which I pointed out to Carrie and showed her what my actual readings were), and some random highs here and there, which I'm sure messed up my A1C since they were so close to my appointment date.

So the closer you are to your test day, the more heavily weighted those readings are toward your results.

Maybe next time I won't get my hopes up so much.  I'll probably just be disappointed again.
Posted by Rachel at 3:57 PM